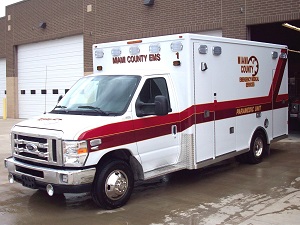 All Miami County EMS ambulances are a LifeLine conversion on a Ford E-450 chassis.

Here is the patient compartment of Medic 6. We carry a full compliment of basic and advanced life support equipment. We use PhysioControl cardiac monitors equipped with 12-lead ECG capability, end-tidal CO2, and SpO2. Our ambulances are equipped with refrigerators for keeping some medications cold and IV fluids for therapeutic hypothermia. We also have IV warmers when warmed fluids are indicated such as for trauma and burns. All of our ambulances are equipped with advanced life support medications, IV pumps, a CareFusion ReVel transport ventilator, and a Stryker Power Pro Cot and stair chair. View the cab of Medic 6. 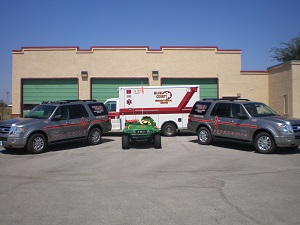 Miami County EMS Station 141 is located just south of Paola on US 169 highway between Paola and Osawatomie at 32765 Clover Drive. Station 141 houses two ambulance crews 24 hours a day, a battalion chief, and the administrative staff.

Station 141 has a kitchen for the crews, a day room, office space, and 2 bunk rooms. Also located at Station 141 is a Special Operations trailer that houses the John Deere Gator, as well as the Miami County Mass Casualty Incident trailer. A vehicle is kept available to pull these trailers to a scene if needed. 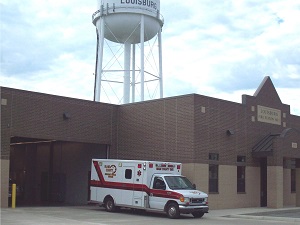 Station 142 has a kitchen, a bunk room for each crew member, a day room, an exercise room, and office space for the EMS deputy chief, and the Louisburg fire chief. Station 142 also has a community storm shelter located in the basement.


Station 143
Located in Hillsdale, this EMS station will be operational by April of 2020. 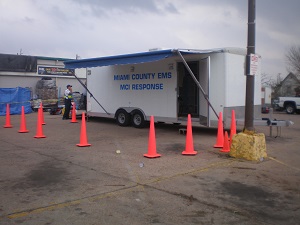 Our Mass Casualty Incident (MCI) trailer is 25' and used for disaster response. This trailer carries extra spine boards, cervical collars, splints, bandaging materials, IV supplies, radios and chargers, a computer and printer, crew supplies, and various other resources. The trailer is air conditioned and serves as a command post or an aid station at a scene. The shelving can be converted into bunk beds for the crews if deployed on lengthy assignments. This trailer has been field-tested at several large disasters including the Osawatomie flood and both the Greensburg and Joplin tornadoes. 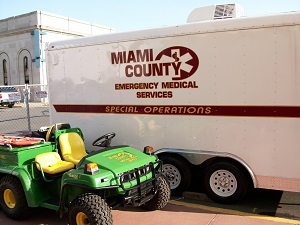 
Miami County's Special Operations trailer is a 16' trailer used to haul the John Deere Gator. The Gator is equipped to transport a patient if needed and is used at remote locations when an ambulance may not be able to gain access to the patient. The trailer and the Gator are also used at events such as the Roots Festival in Paola or the John Brown Jamboree in Osawatomie where it can negotiate crowds easier than an ambulance. The trailer itself is air conditioned and doubles as an aid station at events. A portable generator can be used for lights and electricity when needed.